First let me say thank you r visiting my website and for your interest in my my music.

Reflecting back, while 2022 was by no means a very lucrative year (not many musicians can boast about that quite frankly) but it certainly ended up being a fun, enriching one. I teamed up up with and got to know better - some wonderful Mississauga singers and a few Toronto musicians I’d always wanted to work with. The photo alongside this post was taken at Port Credit’s Studio Paint Bar where singer Heather Christine assembled singers Cat Bernardi, Carla Gonzalez, the wonderful main attraction Liberty Silver and me for a show she produced titled “Woman Wednesday.”  Along with our terrific side players Pat Collins and Stu Harrison we had a ball.  Also through MIssissauga’s Art Council I attended some very helpful workshops on grant writing and business side of this ever changing, ever challenging industry!  Can’t say enough about MAC and how supportive they are of the Arts community.

As I write this I am crossing my fingers in hopes that some grant monies come in for projects I hope to complete - one is for a video project that will feature the development of a song I have written titled “To Be Grand” showing viewers what it takes to complete such a project from inception, revisions, arranging, then ultimately the recording of the tune. Another grant request  (which I just found out I received - yay!) is for a live show here in south Mississauga with the same group of terrific singers mentioned above - stay tuned for an announcement on THAT show!

More performance highlights include shows for both Honsberger and Kings Court Wineries - both alongside my talented guitar-playing son, Joe Leslie!  I’ve also put in several shows fronting the Mississauga Big Band Jazz Ensemble and have had a ball doing so.  Band leader & arranger Rob Boniface has written arrangements for 2 tunes from my album ONE FINE MORNING!  So I quite often get to perform my original R&B tune Sneaky Love & title track One Fine Morning with the big band!  It’s been glorious.  Seriously.

In spring I teamed up with singer Heather Christine at Mandy’s Bistro, debuted at Hirut (both on the Danforth in Toronto) and In summer &just before Christmas booked 4 shows at the beautiful River 16 Restaurant & Lounge in Oakville. working with wonderful pianists Jeremy Ledbetter and Rob Thaller for those shows.  Favourite guitarist/collaborator Bob McAlpine joined me for my debut at River 16.

Also pleased that my album of 2020, ONE FINE MORNING still has 3 tracks in rotation on Toronto’s Jazz FM91 and I’m certainly not done promoting it, given the setbacks endured these past two years.

I did manage to write a couple more tunes - rather salty ones, but once they’re polished up, I think they will definitely have legs. I do have a romantic ballad in there too though. On these I’m collaborating again with the wonderfully talented award winning guitarist Bob McAlpine.

To make a little money and work my chops, I decided to sing for seniors with JV For Seniors and it has turned out to be a delightful thing. I look forward to more of these gigs in 2023.

My agent Ilene Elkaim and I have some exciting plans for more digital shows - and eventually live shows at venues across the province but I don’t want to get too ahead of myself as these things take a while!

I know that if you’re reading this you’re a jazz music fan, so I am going to say this. Now more so than ever, it’s important to just get in the car and get OUT to see some live music.  The music community needs you and guess what?  You need them. It is a glorious thing to see how a live show brings people together.  Community is what it’s all about. These grants I’m writing?  The main issue  they’re focussed on is community-building.  Hands down. We need to step out and join with neighbours and friends, make some new friends, hear more and learn more about the vastly talented musicians in your own community and revel in the joy of LIVE music.  It’s a beautiful thing…

As promised, here is my Valentine to budding romances of today and that of our parents back in their day...Enjoy REMINISCING! 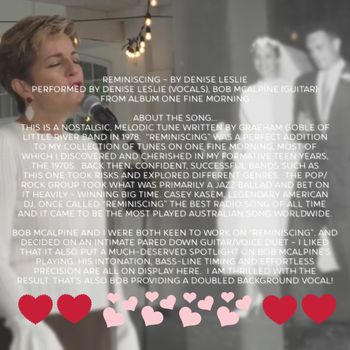 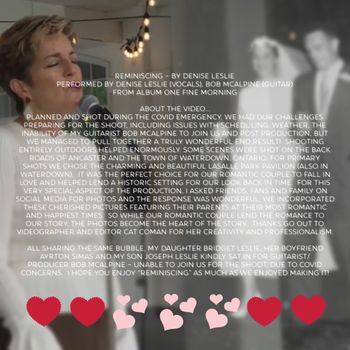 ...and what more meaningful time to release this romantic, nostalgic tale of past romance intertwined with a young budding romance - than Valentines' Day?  Stay tuned for the premiere on all my socials, AND right here - but while you're here, click the button to listen/ purchase, and enjoy the trailer for "Reminiscing" just below that!

INTO THE MYSTIC...Behind the Scenes

"...you can hear this wonderful partnership between Denise Leslie and guitarist/producer Bob Mc Alpine..the whole album ONE FINE MORNING is just great - if you haven't listened to the whole thing yet definitely seek it out...it just makes you FEEL good".               - Raina Hersh, host of The Interval, at Jazz FM91.1

“I have worked extensively with Denise. She's a real natural talent and expressive vocalist. I look forward to hearing her project ONE FINE MORNING with the hard work she's put into it and the stellar team that she has assembled. ” - Bruce Cassidy - Musician, composer, arranger, educator

“Denise Leslie's jazz is unique, musical and captivating. Her scat SOARS. It's a pleasure to work with a musician who cares so deeply about the music and the performance. ” - Brian Farrell - former Artistic Director, Revv52, Calgary, AB.

“Denise Leslie is one of those rare singers who makes every song her own. Her choice of unique material and unmistakable musicality make her one of Canada's upcoming vocalists to watch. It's been a deep pleasure to support her work as a singer and her career in this industry. ” - Micah Barnes, Vocal & Career Strategy Coach

"In the world of jazz singers, it is a rare lady that is able to sound fresh and personal yet still keep a sense of the jazz tradition.    Canadian vocalist Denise Leslie straddles the world of balancing art and songbook with an impressive debut that gives a sense of street pulse savvy along with a finger snapping accessibility." - George W. Harris - Jazz Weekly